While arguably not the most high-fashion footwear, Crocs have grown tremendously in popularity over the last decade thanks in part to several major partnerships with celebrities and fashion brands.

Crocs has experienced success over the last year. During a time when most other brands were suffering due to the pandemic, Crocs saw sales increase by 12 percent in 2020, with a total of $1.38 billion. According to the brand, it estimates revenue growth between 20 to 25 percent for this year.

The brand has leaned more heavily into partnerships over the last few years. After successful and headline-making, high-fashion collaborations with Christopher Kane and Balenciaga, Crocs has continued the momentum with partnerships with other fashion brands such as Barneys New York, Alife, Chinatown Market and others.

Crocs has also been increasing its celebrity partnerships, working on successful collaborations with the likes of Post Malone, Justin Bieber and Bad Bunny.

Now that Crocs is preparing for its latest major collaboration with Grammy-winning DJ Diplo, which will debut on June 8, WWD is looking back to some of the brand’s biggest collaborations over the last few years. Read on for more. 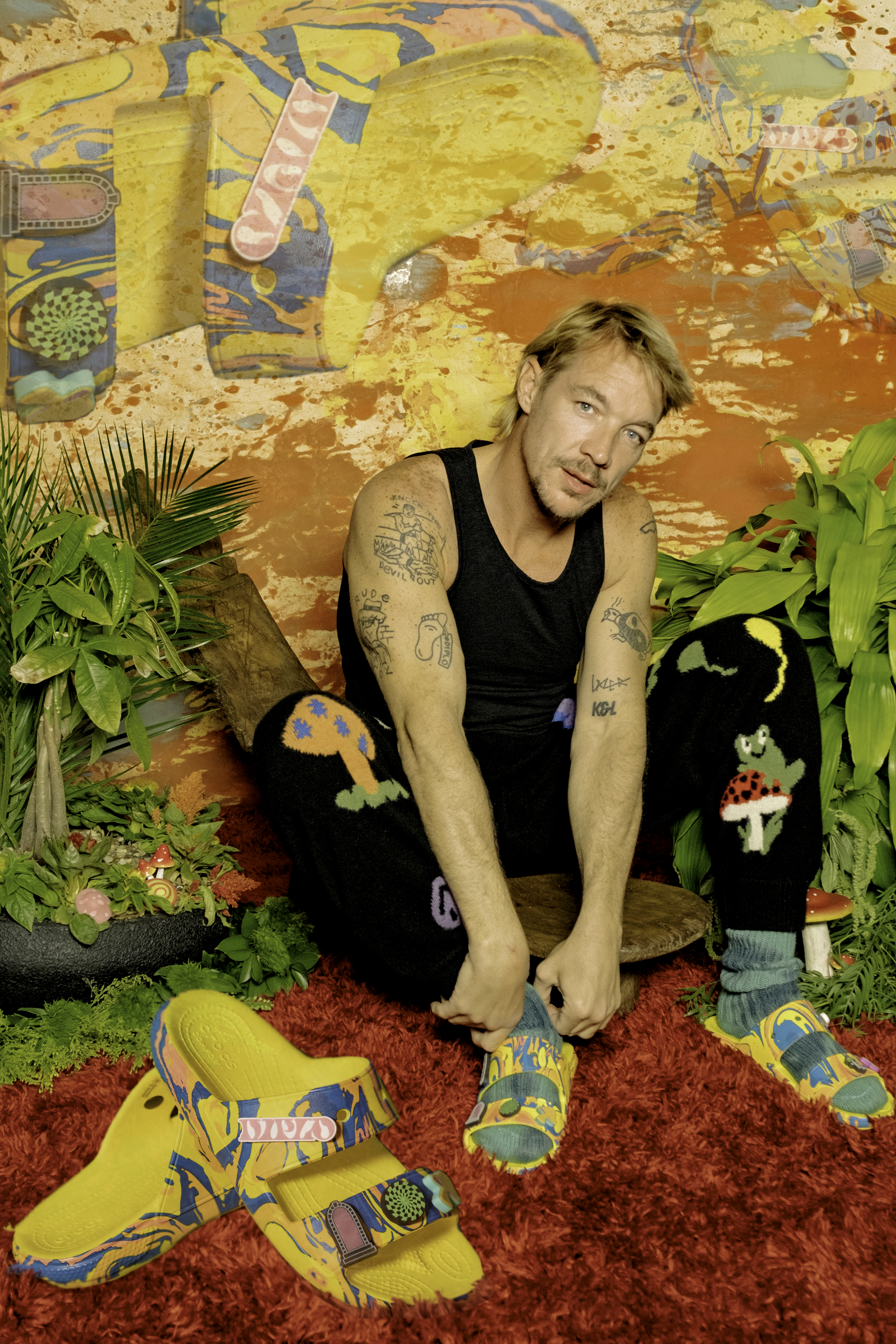 “I wear my Crocs literally everywhere so I’m stoked to have some with my name on them and that others can get them, too,” Diplo said in a statement. “Crocs helped me bring my adventures to life with these designs and the three-dimensional, light-up and glow-in-the-dark mushroom Jibbitz charms are cooler than I could’ve imagined. Now fans can take a walk with me in either the Classic Clog or Crocs Classic Sandal.” 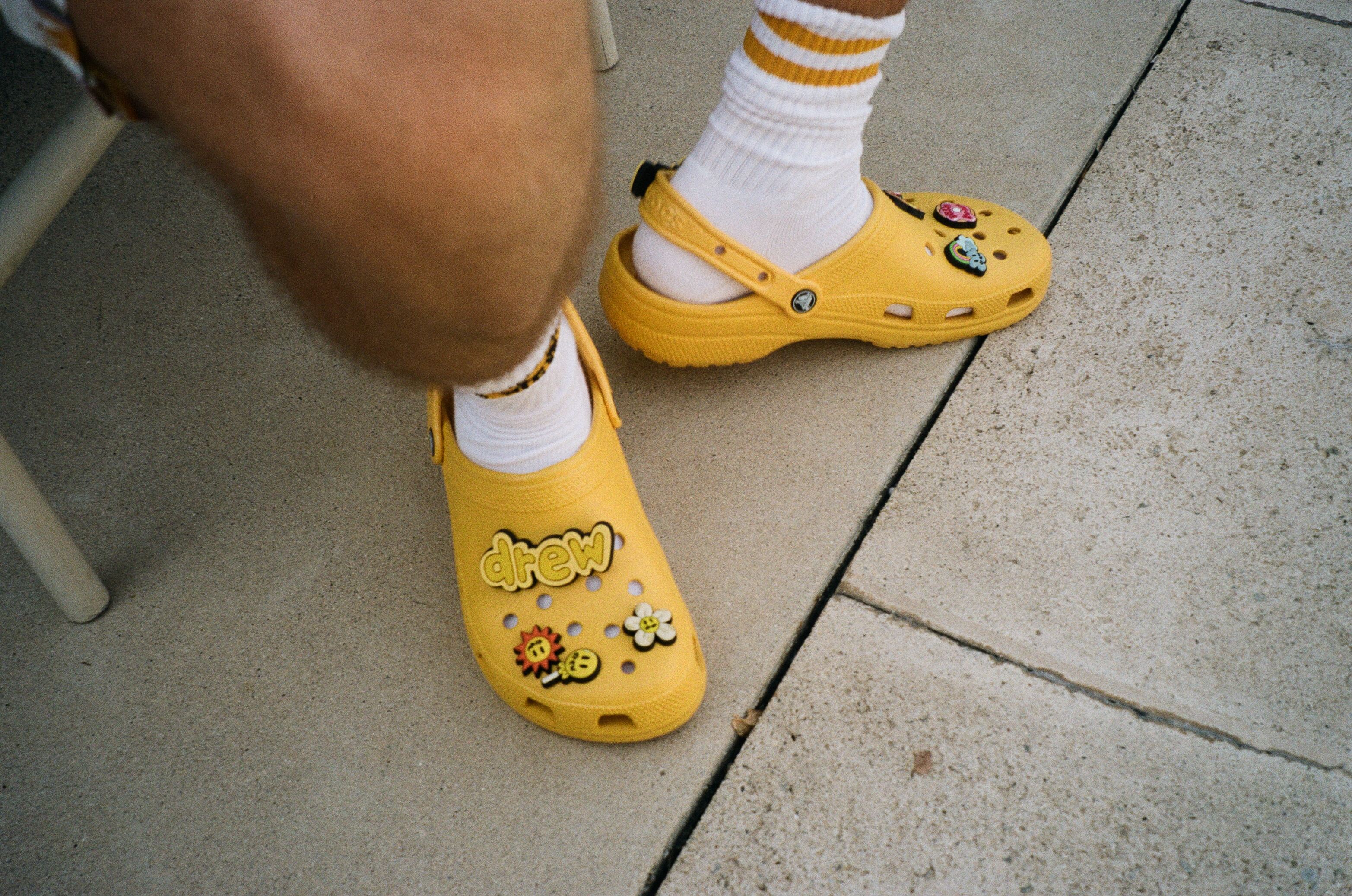 Justin Bieber and his Drew House fashion label have collaborated with Crocs twice in the last year. Bieber’s first collaboration, which came out in October, included the brand’s Classic Clog style in the Drew House brand’s signature yellow hue. The style came with eight Jibbitz, including the Drew House smiley face logo, rainbows, daisies and pizza slices. According to Crocs, the style sold out within two hours in the U.S.

Crocs and Bieber followed up with their second collaboration in March, this time for a lilac-colored Classic Clog style. The shoes came with cartoon-like Jibbitz and a pair of Drew House branded white gym socks.

“Crocs with socks is definitely the move,” Bieber said in a statement. “They’re comfortable, they’re fashionable, and most importantly it’s fun to bring your own style to how you wear them.” 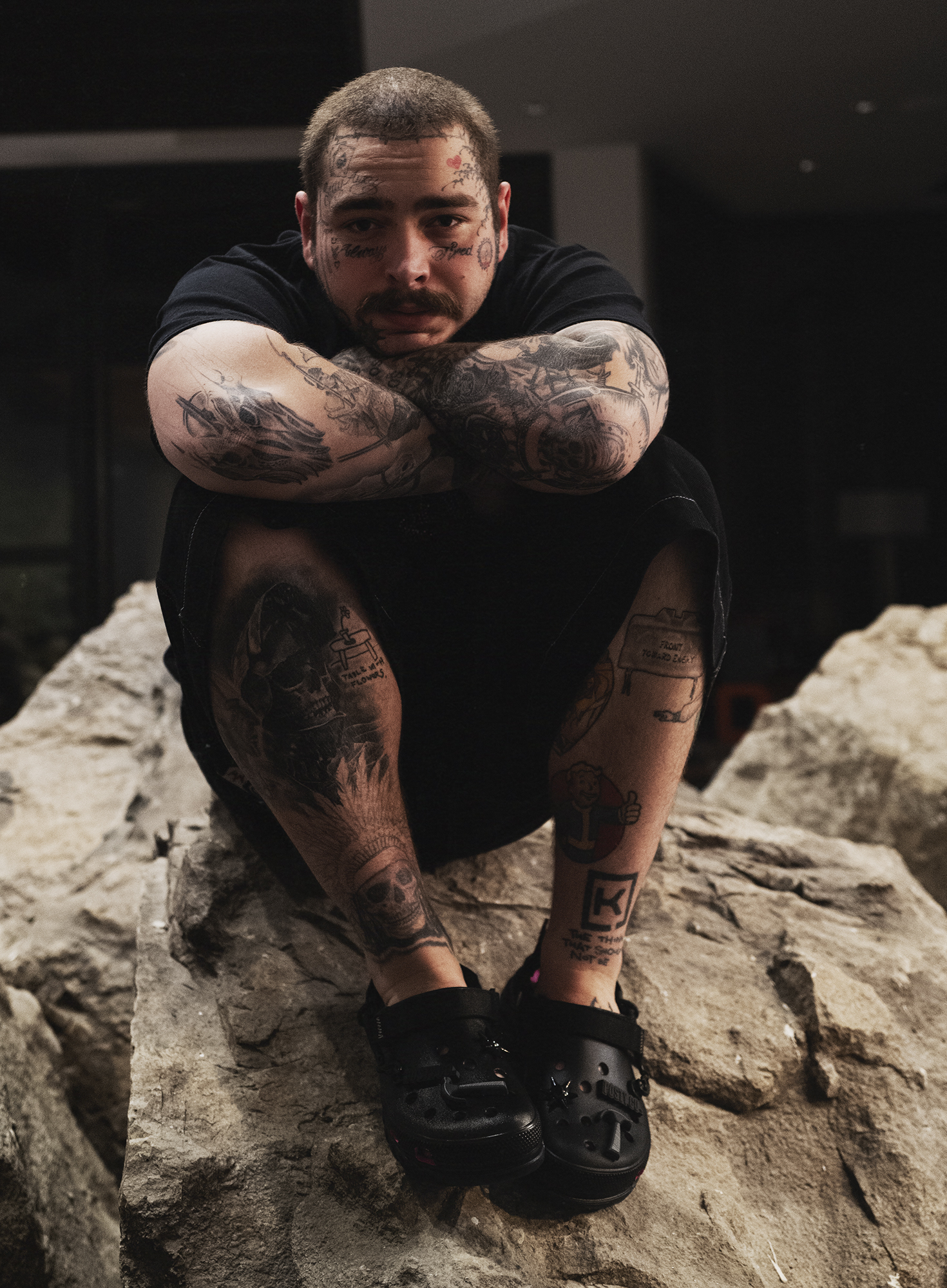 Crocs’ most notable celebrity partnership has been with rapper Post Malone, who has teamed with the brand on five collaborations since 2018. His latest collaboration came in December with a pink and black version of the Crocs Duet Max Clog II. The styles included Jibbitz inspired by the rapper’s tattoos, like images of grapes, hearts and rubber ducks.

Post Malone’s other Crocs collaborations have included designs with a devil-motif pattern, a yellow clog with a barbed wire image, a rainforest-inspired clog and a black-and-blue camouflage pattern clog. The rapper’s Crocs collaborations typically retailed for $60, but are now available on resale sites for hundreds of dollars. 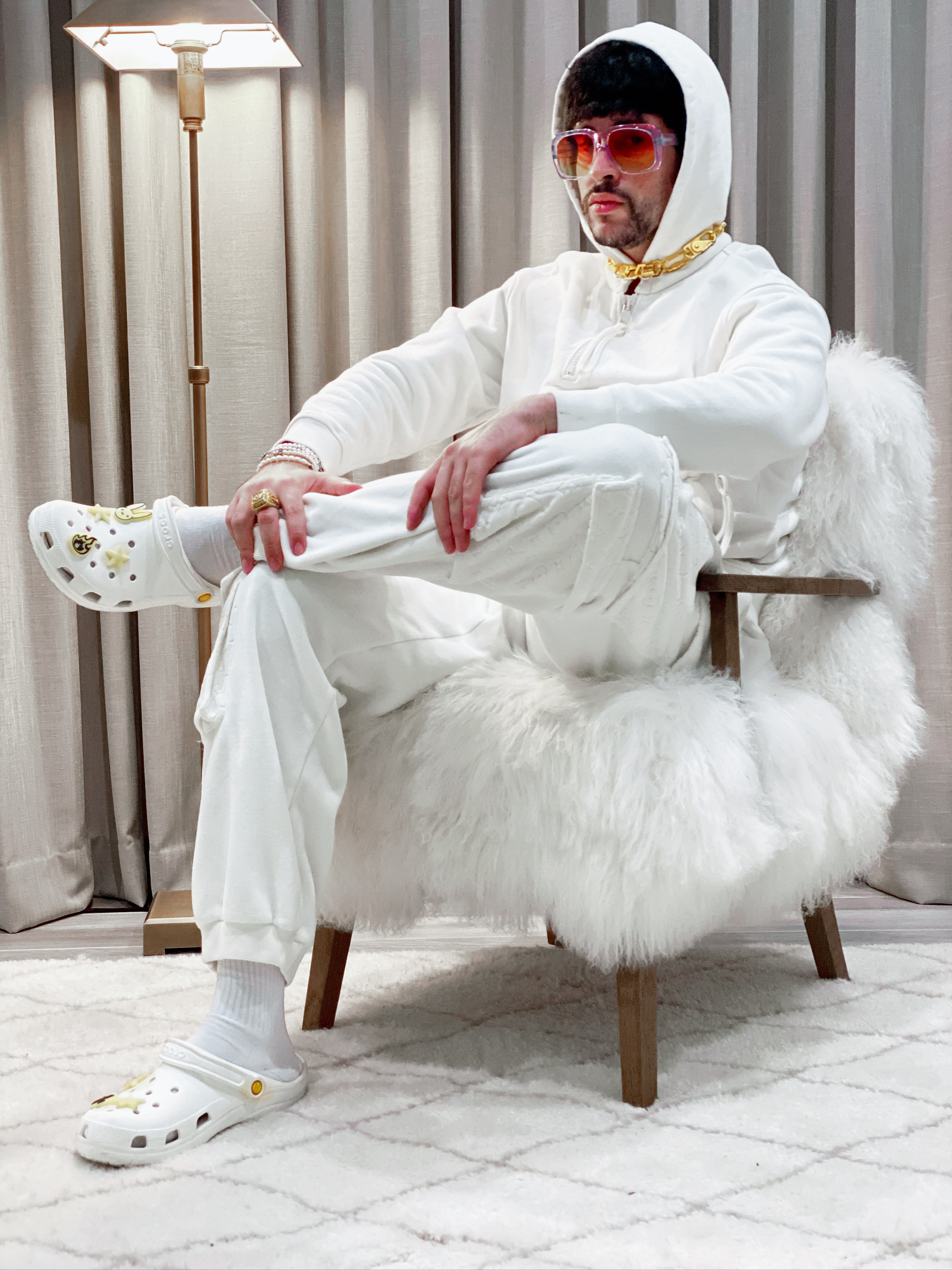 Bad Bunny teamed with Crocs in September for a pair of celestial-themed, glow-in-the-dark Crocs Clogs. The white shoes came with an array of Jibbitz featuring planets and stars.

“I believe in being true and not placing limitations on myself, which is also something Crocs represents, and this is the message I always want to make sure I send out to my fans,” Bad Bunny said in a press release. “As a longtime fan, creating my own design for Crocs was a lot of fun. I hope they inspire others to have their own fun with their personal style and wearing what makes them happy.” 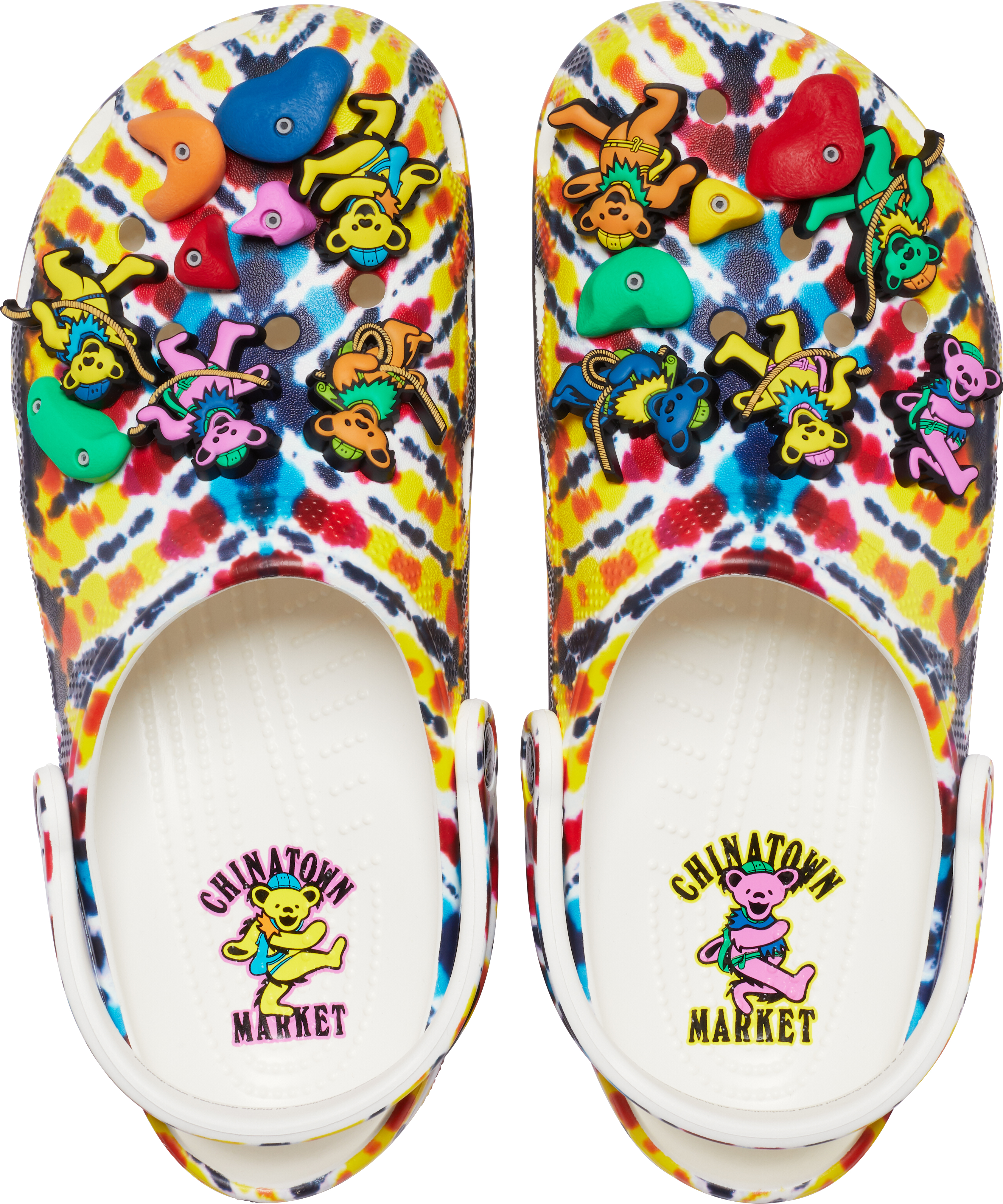 Chinatown Market, which is currently undergoing a name change, has teamed with Crocs several times over the years. The brand’s most popular collaboration came in September when it co-created a multicolored, tie-dye Crocs clog inspired by the Grateful Dead. The vintage style gave a nod to the band with its dancing bear Jibbitz, which referenced the band’s 1973 album, “History of the Grateful Dead, Volume 1.” The shoes retailed for $60 and quickly sold out. Due to the collaboration’s popularity, Crocs rereleased the style this January. 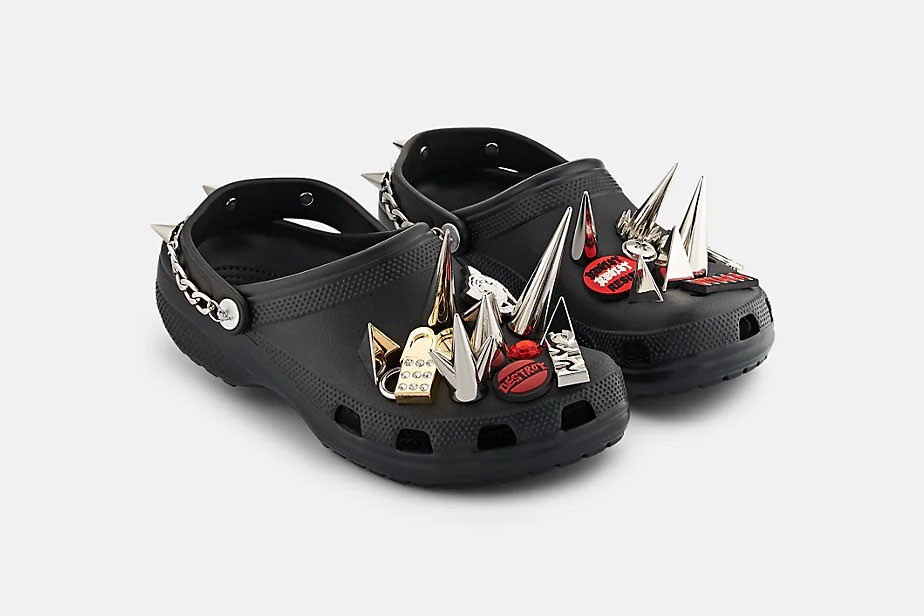 The now defunct retailer got in on the Crocs hype in 2019 with its own high-fashion collaboration. The brands teamed on two punk-inspired styles, one in black featuring chains and spiked Jibbitz and one in blue denim that also featured studs and spikes. Both styles retailed for $90, and are sparsely available on resale sites for as high as $800. 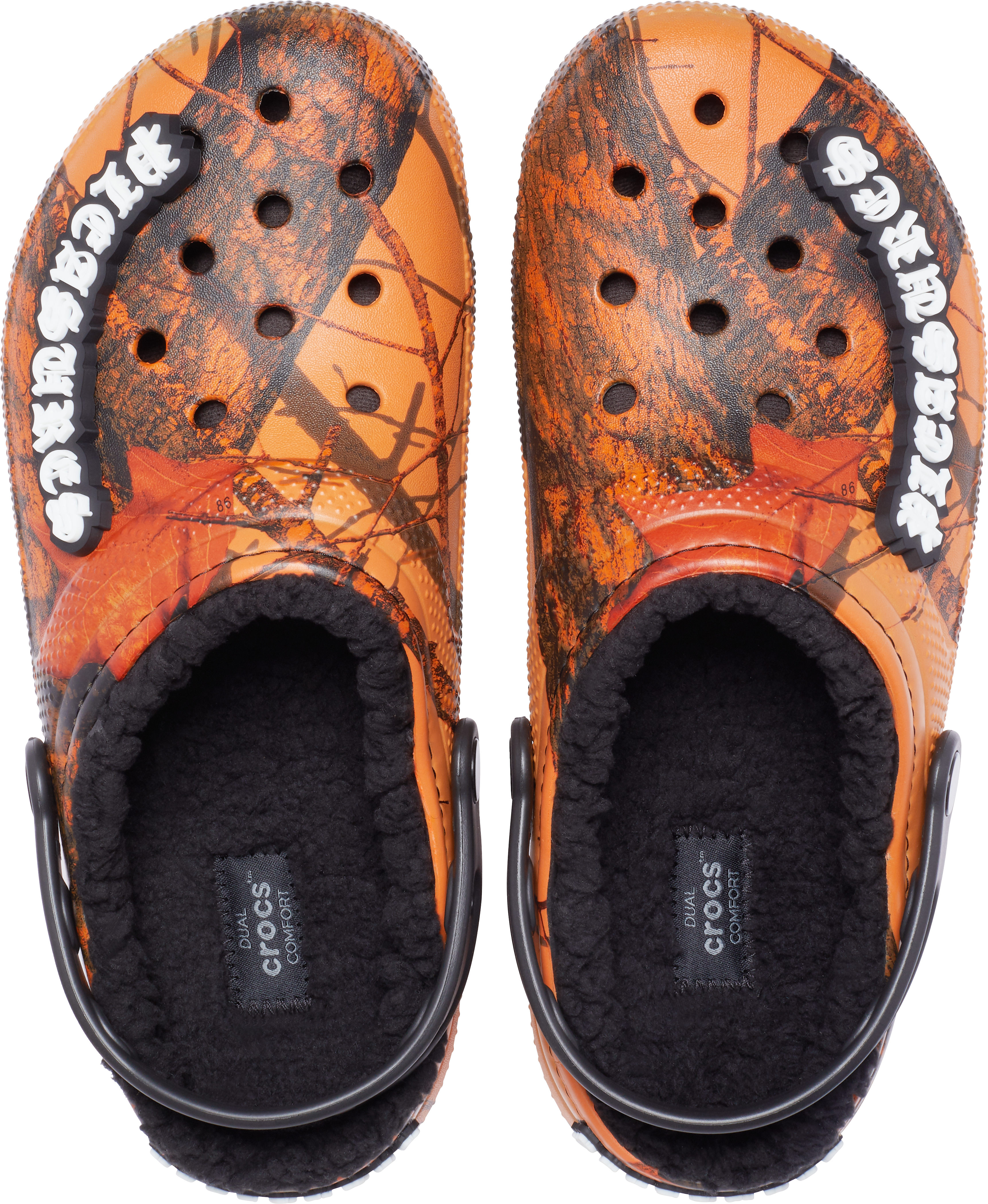 Los Angeles-based brand Pleasures has collaborated with Crocs twice since 2019. Its first collaboration was a black Classic Crocs style with a skeleton design, which is now going for as high as $550 on resale sites. 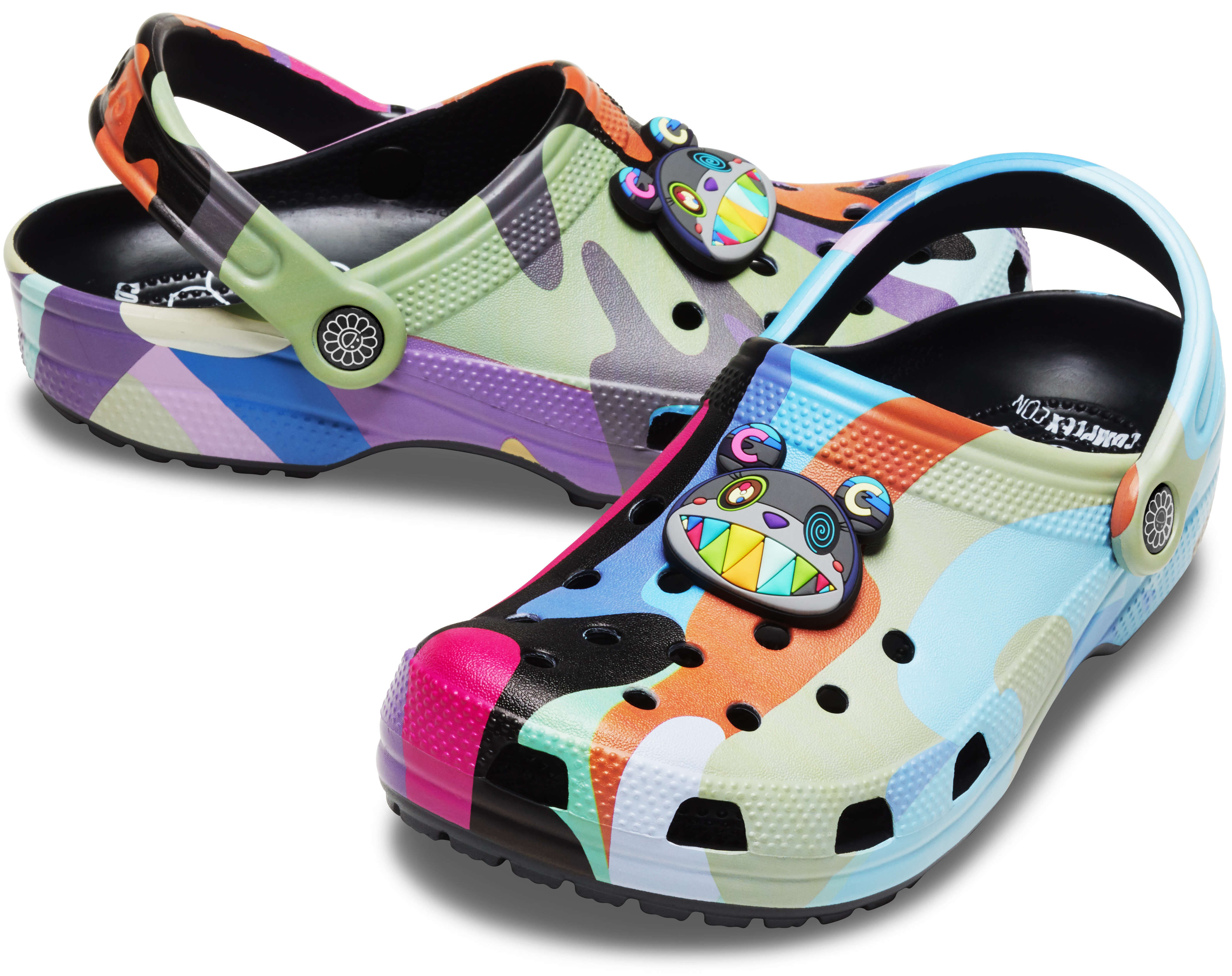 Crocs embarked on its first collaboration with an artist in 2019, teaming with Takashi Murakami for a multicolored clog style that debuted at Complex Con. Murakami leveraged his iconic images for the collaboration, turning his famous teddy bear and smiling flower designs into Jibbitz. The collaboration is currently available on resale sites for as high as $1,350. 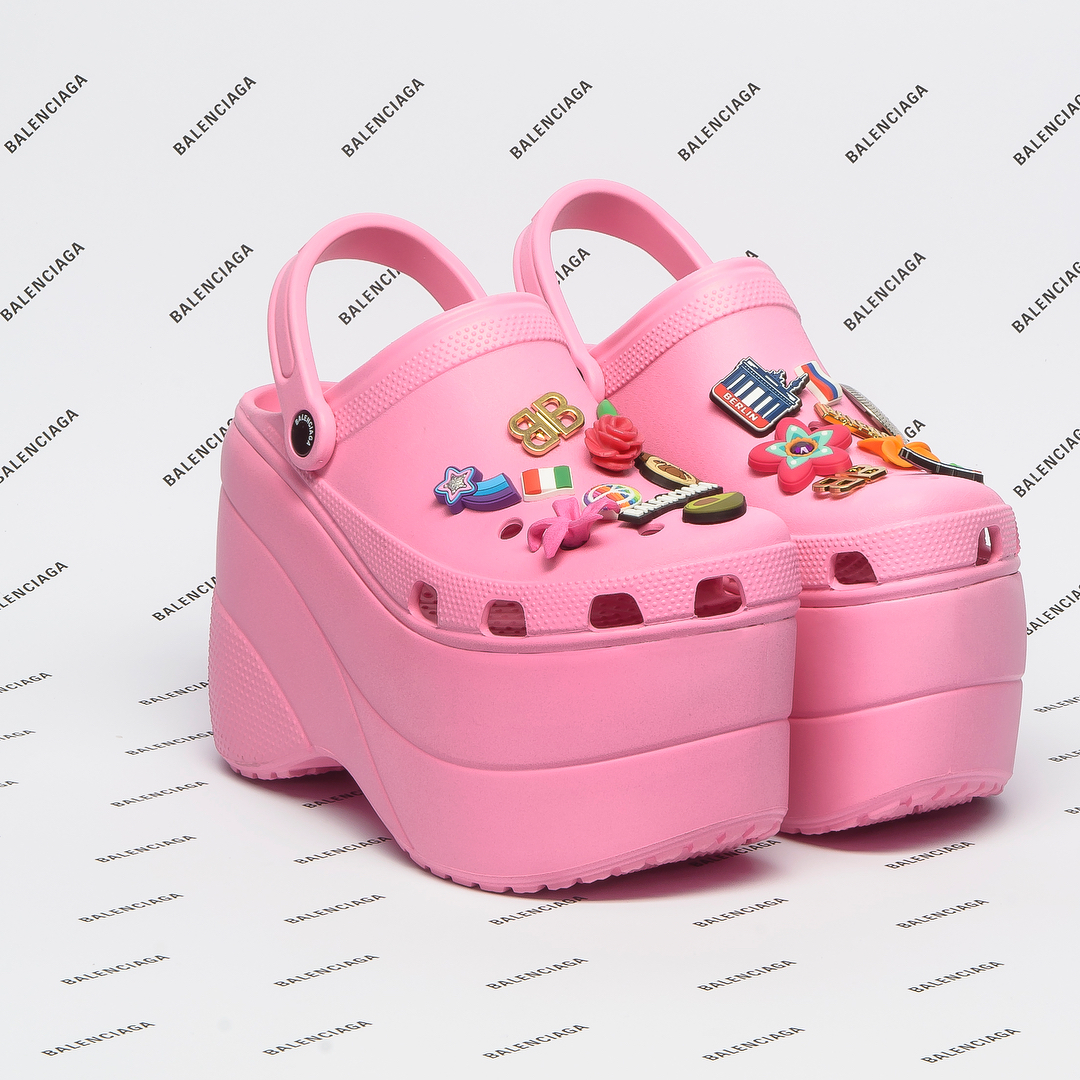 Designer Demna Gvasalia gave Crocs a high-fashion makeover for the Balenciaga spring 2018 ready-to-wear show, where he dressed multiple models in platform clogs in pink, green, yellow and black. The style came with Jibbitz featuring the Balenciaga logo, flowers and the Italian flag, among other images. The clogs retailed for $850 and quickly sold out.

“It’s a very innovative shoe,” Gvasalia told Vogue about the collaboration. “It’s light, it’s a one-piece foam mold and to me, these kinds of techniques and working with these kinds of materials is very Balenciaga.” 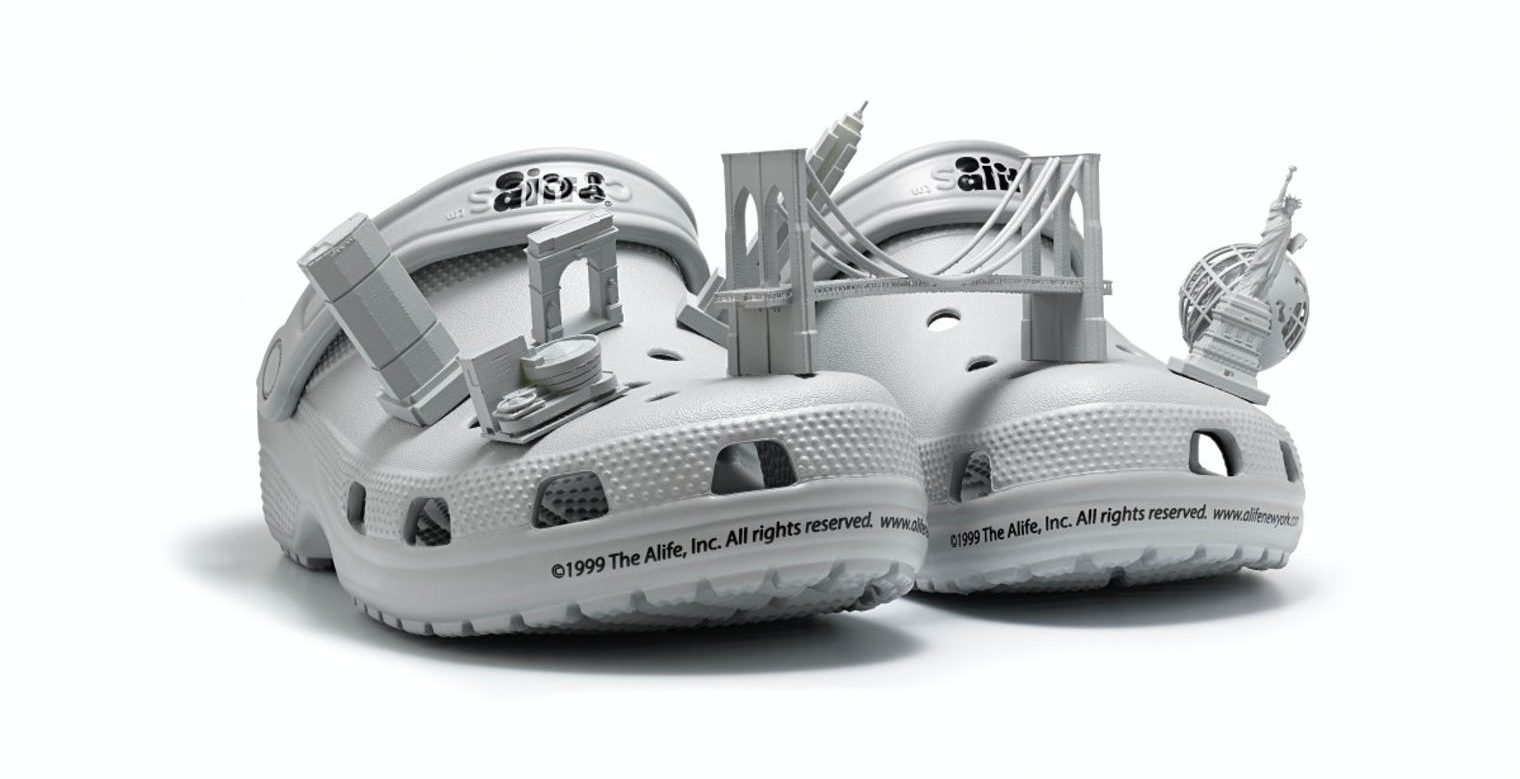 Crocs teamed with streetwear brand Alife in 2018 for an innovative take on the brand’s Classic Clog. The brand designed a white pair of Crocs Clogs embossed with the Alife logo and featuring a built-in white gym sock with blue and red stripes.

This collaboration also included two other Classic Clog styles in gray: one featuring the Alife logo in black and another featuring three-dimensional Jibbitz meant to resemble New York City landmarks, like the Statue of Liberty, and bridges. 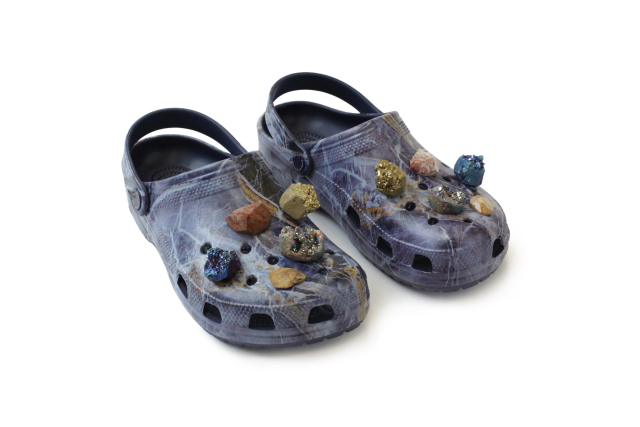 “Crocs are great, I love them,” Kane told WWD following the show. “I don’t really care what anyone thinks. I don’t think anyone’s got the right to say right or wrong, unless they’re God, otherwise just shut up.”

Kane approached Crocs himself for the collaboration and his team worked on the four marble designs and charms. They were sold in a small assortment of stores that Kane distributed his designs to.

“I think when you look at the items that Christopher built, it’s something really special,” said Crocs’ president, Michelle Poole. “Part of his design aesthetic is creating the extraordinary from the ordinary. There is beauty in all of the individual gems and how they really enhance the overall shape of clog, plus the marble finishing. And up close all of these handmade charms are something really special.”

Kane later came out with another collaboration with Crocs, this time four tiger print clogs embellished with floral Jibbitz.